Students collectively owe over $22.3 billion in loans to the Canadian government. Students are graduating with an average of $13,549 in federal student loan debt - which is only representative of 60% of their actual loan as 40% also comes from their provincial governments.

According to the Canadian University Survey Consortium Graduating University Student Survey from 2021 nearly one third of all graduating students have $20,000 or more in student debt. That's not right.

LET'S FIGHT FOR GRANTS NOT LOANS

Students in Canada need grants, not loans. This is not just a values statement thrown around by current students who feel the crushing burden of student debt — it is backed up by wide-reaching public support and by empirical research time and time again.

Up-front grants relieve financial pressures that students face while in study, and enable students to focus more on being successful in their classes, rather than worrying about how to make the next semester’s tuition fee payment. Further, the assurance provided by up-front, needs-based grants addresses debt aversion, a factor that limits those from low- and middle-income backgrounds from enrolling in the first place.

A study conducted by the Millennium Scholarship Foundation found that students with large amounts of financial aid are more likely to dropout. Yet, if student aid was in non-repayable grants, this had a positive impact on their likeliness of staying in school.

Student loans are often touted as a solution for accessing post-secondary education for students and families who can’t afford the high up-front costs (such as tuition fees, ancillary fees, and textbook costs). This supposed improved access then is seen as a means to increase enrolment at institutions. However, focusing on increased student enrolment does not paint a full picture. A comprehensive research summary on the ethics of student debt finds that student loans may have a positive impact on getting students to community college in their first year; yet the student loan debt then has a negative effect on continuing in later years, often resulting in students leaving school before completing in order to avoid further debt. This research suggests that the same mechanisms that may increase access (i.e. loans) may actually decrease completion rates.

HOW CAN WE GET AHEAD, WITH DEBT DRAGGING US DOWN?

Student loans continue to be the main source of financial assistance available for young people and workers from low- and middle-income backgrounds to access the education they need to start a new career and support a family. As education costs have increased far beyond inflation and as real incomes have declined (1), more and more students require financial assistance, and student debt has ballooned to now historic highs.

Student debt has become ubiquitous across Canada—nearly half of all students graduate university in debt (2). The CUSC Graduating Student Survey from 2021 also reported the average education-related debt among all graduating students, is just over $13,000. However among only those with debt, the average amount more than doubles reaching almost $29,000. The survey also reported that students required over $17,000 of financing for one year of university education (3).

According to the latest National Graduates Survey 2016, the average student debt for a bachelor’s program in BC is over $30,000 (4). Among bachelor students who took out a loan in BC, the percentage of students graduating with a large amount of debt (more than $25,000) has been growing. In 2010 (the most recent year for which data is available), for bachelor graduates who owed money, 50% owed more than $25,000 in student debt.

How can we expect students to start their careers already saddled with such large amounts of debt? 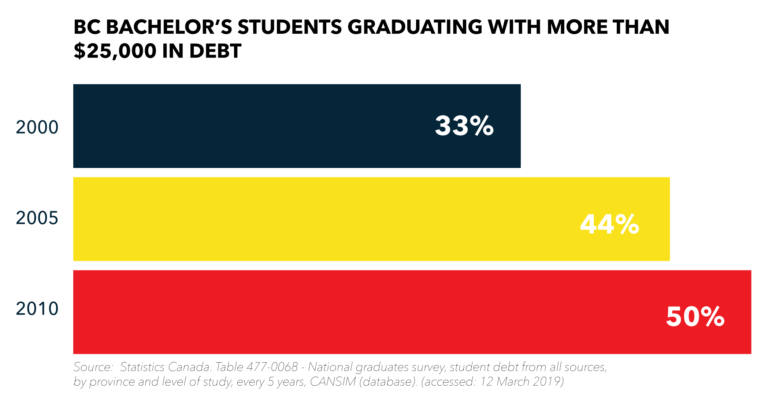 Education is an investment for both the learner and society. Society’s economic return is realized in many ways. For example, a 2012 report showed that British Columbians with university education paid between $80,300 and $140,000 more in income taxes, and required between $15,400 and $18,100 less in government aid throughout their lifetimes (5). Across Canada, those with a university degree earn 63% more than those with a high school diploma, have lower unemployment rates, and are less impacted during recessions compared to the rest of the working population (6).

The government will see a clear financial return by investing in programs that assist students from low- and middle-income families. To sustain and grow the economy, Canada must have a student grants system in place to ensure that those without the necessary resources can get the help they need to complete a post-secondary program.

Join us and call on the Federal government to make their doubling of the Canada Student Grant a permanent investment.

(4) The exact value for bachelor’s graduates is calculated at $32,300, for graduates surveyed in 2010. The newest survey data for 2015 data will be released in November 2019. Source: National graduates survey, student debt from all sources, by province and level of study, every 5 years, CANSIM (database). (accessed: 12 Mar 2019)