“Students Are Voting” is more than just a campaign slogan, it happened.

The numbers are out, and they paint a picture that is not at all surprising: young people voted in the provincial election.

These numbers come on the heels of the 2015 federal election, which saw a record-breaking surge in youth voter turnout, particularly in British Columbia.

“The numbers in the Elections BC report demonstrate what students have been saying all along – young people aren’t apathetic, we’re here, and we are making our voices heard,” said Simka Marshall, Chairperson of the BC Federation of Students. “These numbers are in stark contrast to the fallacy that young people don’t vote and thus our issues are less important.”

The BCFS ran a campaign titled Students Are Voting throughout the provincial election, emphasizing the importance of engaging in the electoral process. Throughout the campaign, students pledged to vote, learned about local politicians and voting locations, and students’ unions garnered media about youth voting. 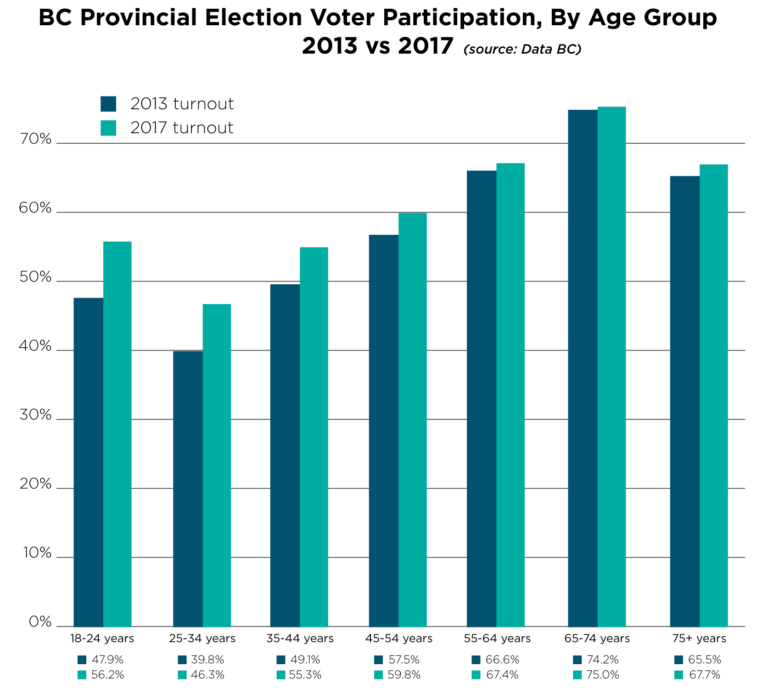 Several ridings in the 2017 election were won by very small margins—fewer than 200 votes each, with one being decided by only 87 votes. There is no doubt that increased engagement by young voters helped to change the outcome in these and other ridings. Young voters understanding their agency and power truly can change the outcome of an election.

“Students are engaged in their communities and on their campuses in issues that matter to them,” said Aran Armutlu, BCFS Campaigns Coordinator. “After two successive general elections with a high turnout from young people, we are hopeful that politicians will open their eyes and see that we are an important demographic and their policies need to reflect that.”

And to the politicians and political parties: we hope you’re paying attention.