Why do we do equity work on campuses?

The Federation exists to fight for fully accessible education in the province and an important part of that fight is making education more affordable. But what about when folks are on campus? Accessible education must include a safe campus community that empowers all people to succeed. To that end, the Federation has created the “Unlearn” campaign, which contains a series of materials to raise awareness and start conversations about the work we all have to do to unlearn hurtful behavior. Materials for this equity campaign are provided to help member locals with general outreach and education, to enhance local initiatives, and assist member locals if they are responding to an incident or issue in their community.

Every day, we are exposed to all sorts of stereotypes and misinformation about marginalized groups. History, the news, media, and even those around us spread this misinformation, often unknowingly. These stereotypical, and harmful, ideas can become normal to us if we don’t take the time to critically analyze them.

“Unlearning” is a process which requires an active approach that enables individuals to confront their own biases about other people - such as queer people, people of colour, Indigenous people, people with disabilities, and more.

Unlearning is a process of deconstructing what society has taught, advised and influenced us to believe. It is about breaking down the assumptions we have about other people and groups, figuring out where those assumptions came from and finding new ways of learning and understanding that do not cause further harm to marginalized communities.

QMUNITY: QMUNITY is a non-profit organization based in Vancouver, BC that works to improve queer, trans, and Two-Spirit lives. We provide a safer space for LGBTQ2SAI+ people and their allies to fully self-express while feeling welcome and included.

Hogan's Alley Society: The Hogan’s Alley Society (HAS) is a non-profit organization composed of civil rights activists, business professionals, community organizations, artists, writers and academics committed to daylighting the presence of Black history in Vancouver and throughout British Columbia.

Disability Alliance BC: Since 1977, Disability Alliance BC has been a provincial, cross-disability voice in British Columbia. We champion issues impacting the lives of people with disabilities through our direct services, community partnerships, advocacy, research and publications.

The Anti-Violence Project (AVP): is committed to addressing and ending gender-based and sexualized violence on campus and beyond. We strive to provide anti-oppressive and sex-positive services, advocacy and action on-campus and off to people of all genders, in partnership and collaboration, in order to address and resist all intersecting forms of violence.

Ending Violence Association of BC: The EVA BC is a dynamic, solutions-based provincial association based in Vancouver, Canada. Since 1992 we have trained and supported more than 300 anti-violence programs and cross-sector initiatives across the province that respond to sexual and domestic violence, child abuse, and criminal harassment.

Below we have provided definitions for the words that appear on our Unlearn materials, as well as a few others that are important to know.

It is important to remember that these terms are not cumulative and everyone has different experiences when interacting with these learned behaviours. Some of these terms overlap with each other and must be considered on a case-by-case level. Many of these issues impact all campus members and thus allyship between students, staff, faculty, and administration are important in combating these negative assumptions. 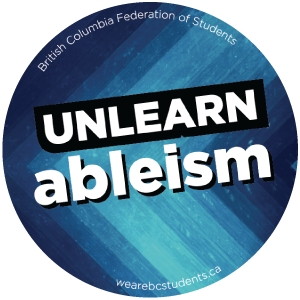 Ableism:
Ableism is prejudice or discrimination against people with disabilities. It can be difficult to detect ableism as it may express itself in the form of expectations, assumptions, values, actions and/or verbal communication. Furthermore, there is the implicit assumption that everyone is able-bodied or without mental illness and generally has the same abilities. This assumption can be harmful, especially for those with invisible disabilities such as chronic pain or depression and anxiety.

In post-secondary education, ableism is engrained. Ranging from building architecture and physical access on campuses to institutional policy. Ableism can impact how Disability Resource Centers run and recognize those with differing ability, professors communication practices and working with students to enhance their experiences and needs throughout the students’ academic career. Many circumstances that positively impact students with differing abilities end up benefitting all students.

Colonialism:
Colonialism is the establishment, maintenance, acquisition and expansion of colonies through violence in one territory by people from another territory. Colonialism is a set of unequal relationships between the dominant colonial state and the Indigenous peoples of the colonized territory. You might hear this term used while someone is providing a territorial acknowledgement, this means they are acknowledging that the land we operate on was taken by colonial forces and without consent.

Colonialism on campus can be seen as stereotyping Indigenous students as token students or someone that is not as qualified to be on campus. It can also be found in course curriculums in only representing certain ways of knowing and knowledge sharing.  It is important to combat such stereotypes and attitudes. This can be aided by practising decolonisation in post-secondary education, which positively impacts every campus community members’ outlook by enriching their access to knowledge and respect for everyone. 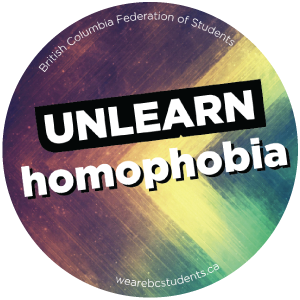 Homophobia:
Homophobia is the irrational fear, aversion and hatred of those who love and sexually desire those of the same sex. Homophobia ranges from dislike and avoidance to discrimination against LGBTQ2SIA+ people on an institutional level to acts of violence. LGBTQ2SIA+ is an acronym describing a variety of identities under the queer umbrella and includes terms such as lesbian, gay, bisexual, transgender, 2-spirit, intersex, and asexual. The + indicates that this is not a comprehensive acronym and does not necessarily represent every person in this community.

Homophobia on campus can come from a certain curriculum, undertrained faculty and staff, and unwelcome or unsafe spaces. Inclusive events and language are important in creating spaces and experiences where all participants can benefit from these positive changes. 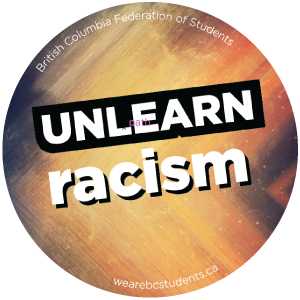 Racism:
Racism is a system of disadvantages based on race. It empowers people with the ability to act on the belief that different races have different qualities and abilities, and that some races are inherently superior or inferior. Racism manifests in many ways, from dislike and avoidance of people based on their race to discrimination against them on an institutional level to acts of race-based violence. Racism is related to power: who has power and who is given power by society. Racism exists beyond one-on-one interactions and is present in the institutional systems we operate under today.

Racism can be seen in post-secondary education through stereotypes of how certain ethnicities and cultures may act or perform on course work and their areas of studies. It also limits the roles and opportunities afforded to specific people in comparison to others such as leadership and upper-management positions, workload responsibilities, and representative expectations. 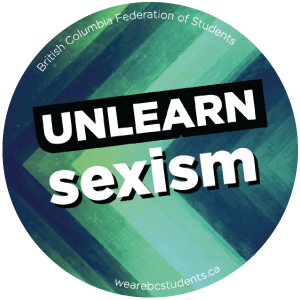 Sexism:
Sexism perpetuates a system of patriarchy where men hold power and privilege while other genders are subordinate to them. Sexism ranges from discrimination based on gender as well as the attitudes, stereotypes and cultural elements that promote this discrimination seen in daily media and events. It is important to note that sexism, like any other form of oppression, is related to power and, historically, men have been afforded much more power than those of other genders. 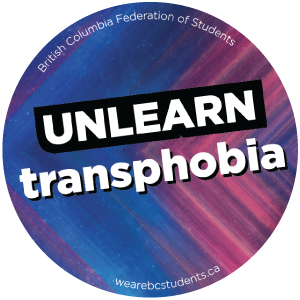 Transphobia:
Transphobia is a personal, societal and systemic desire to maintain the gender binary which obscures the reality of the fluidity of gender and diminishes or ignores the experience of persons who do not identify with one or any gender categories. Transgender individuals are those who do not identify with the gender they were assigned at birth and live their life as the gender that they are -not the one which was written on their birth certificate. There are many categories, labels, and groups that transgender people self-identify as and only the individual is able to define what their specific gender and gender expression are.

It is important to keep in mind that all of these issues impact people on campus but also act as barriers for people attending. Fighting to make academia and our campuses more inclusive and equitable will create environments that are safer for those coming from equity seeking groups.

Sign in with or
Don't have an account? Click here to create one.
Please check your e-mail for a link to activate your account.
Unlearn - starting conversations about equity
Unlearn: Advocating for Equity
Home